The topic that I decided to cover for this course was the process and reasons that people should become a writer. I wanted to push all of the fears and roadblocks that writers encounter off to the side of the road and show people that to be a writer and claim that title, all they have to do is write.

When creating a graphic collage that would relate to my topic it took some time before I realized what the perfect idea would be. When trying to become successful writer there is always one thing that seems to get in your way… distractions. After I had the idea I thought for nearly two days about how I would portray it. I had the initial idea of having a winding road with me traveling down it as the writer with all of the distractions that keep me from writing along the shoulder of the road. After hours of thought I decided that was less like the art I wanted and started thinking of a different route.

I decided to take all of the photos myself to avoid any copyright restraints and to increase my abilities with my camera. I had my girlfriend snap the picture of me thinking at my desk first and added that as my collage background. Next I added a photo of my work building, my puppy and my x-box. All things that at least in my life are distractions from writing.

After adding the pictures to the collage I made the background black and white in order to make the distractions really stand out. I also added a frame and shadow to the distractions pictures. With all of them I made small adjustments to the darks, lights, color and clarity of the picture. I also tried to position them as to be looking down upon me as I was trying to think of an idea to write about.

After reading the feedback from my peers I found that what the distractions were may have been causing some confusion so I went back and labeled the individual photos. To the labels I incorporated a inner and drop shadow so the words blended better inside the photo. I also made the distraction photos slightly lower in opacity to make them seem more like what was on mind. I think this was a great addition because it made the collage speak for itself in a sense. 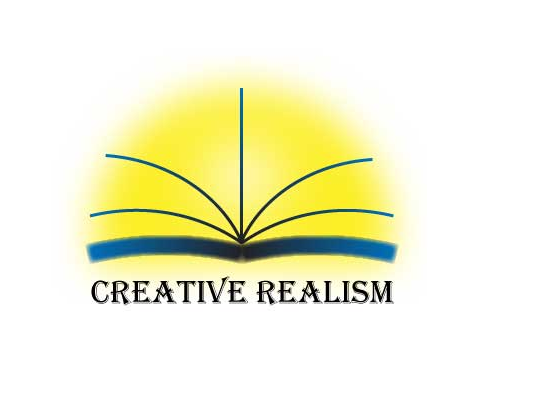 When I created my initial logo the process in which I posted stated:

Considering that creative writing is the foundation of this site I thought having a book as my logo’s foundation seemed an obvious choice. I created it using Adobe Illustrator. I created a rectangle, added color gradient and blur then finally arced

the image. After that I copied the image, flipped it and aligned it with the first image, which gave me the spine and covers of the book. After that I added two lines, slightly shorter than the covers and arced them. After copying these and aligning them off the spine the appearance of pages was relevant. I then added a drop shadow to the entire book image and grouped them together. I added the business name in all capped letters below the symbol and faded in a sun behind the logo for the inspirational aspect.

After reading through the feedback that I received from my fellow students and instructor I made a few small changes to really make the logo stand out. I went back into the design and attached the pages to the spine of the book while also shortening a couple pages to make them all touch the outer rim of the sun. I also made the sun more prominent by increasing its visibility. By the feedback I read from my instructor I changed the font to make it something that will convert to a smaller scale more easily.

After completing these steps I am really impressed with the final product. Some of the things that my feedback provided me I truly had not thought about in my initial design. I think that by getting the perspectives of multiple it allowed me to further think outside of the box and fine tune my logo to be something worth marketing.

When first approaching the creation of this audio segment I was unsure of the direction that it should be taken. I wanted to talk about writing creatively, but that does little for narrowing down what to speak of in a short 3 minute or less segment. After much debate I decided it is always best to start from the beginning… writing.

I didn’t have much experience in creating professional sound clips because even as a music journalist in the past I had only used clips from the artists performing so I was concerned about how I was going to do this. I decided that a good tactic would be to find a great interview from an author and work around that.

I was able to find a video recording created by Khaled Hosseini which he recorded himself in 2008. In the video he talks about his process in creative writing and what has worked for him in his writing career. I loved the clip, which was 2 minutes long, but my next challenge was picking a short 30 second clip from the piece. I found what I was looking for precisely and edited out the segment using Audition. I added in my introduction and posted as a draft for the assignment.

I was anxious for feedback and the opportunity to see what other classmates had created. Upon listening to other posts I found that many had the same issue with transitions as I did, but I also found that the ones that added music or sound effects at the introduction and conclusion of their clip seemed to grab and hold my attention far more. So I decided to add this aspect to my own segment.

The sound of a typewriter beginning and ending my segment seemed to give it an element of depth that it was initially missing. I loved it. I also adjusted my transitions a little to allow them to flow more free and slightly increased the volume of the interview section to more evenly portray the leveling.

Overall I know this isn’t perfect, but with the feedback my peers provided I was able to create something informative that is worth listening to.

With this video project I was the first one to post remarks after it was uploaded and found it reassuring that the things that I felt needed edited in the draft were very similar to the things that other students mentioned later on in their comments.

The first and most commonly agreed upon change was that the title and final credits did not stay on the screen long enough so I went in and adjusted their positions and made them last longer to make it easier to read. I also adjusted the final credits position so it appears that they are scrolling out of the top of the pages of the background book.

The next thing that was mentioned was that the picture of JK Rowling was moving across the screen far to quickly to recognize her. What I did for this was remove the motion and instead had her picture appear in the center of the screen and simply fade out to the George RR Martin picture. This allowed more face-time for the photo.

Mentioned by one of my peers was a glitch during that same scene which I found to be an accidental transitional error so it has also been corrected in order to make the entire scene flow smoothly with nothing to distract the viewer.

The final thing that I changed was the fade in and out of the interview clip. Despite it being an artistic choice to originally have it do that, I understood the remarks that stated it was slightly distracting so I had the bookshelves remain with a higher opacity and left the interview clip without any fading.

I really enjoy the final product on this project and appreciated the feedback that I received in order to make this a video that is not only informative, but also appealing to the viewer.